It was Thursday, the day before my supposed last day and I had two recipes to go. My back: HURT! I had seen the chiropractor twice and my physical therapist three times. Still: Hurt. How could I make my deadline, I complained to incredulous ears.

My friends and family were non plussed. What do you mean you won’t make your deadline…didn’t you set it yourself? Like, who cares if you don’t make your deadline, you’re the only one counting. Well, hell, I know THAT! It was the PRINCIPAL for god’s sake! If I can’t get my friends to take my own imaginary deadlines seriously, what else could I count on them for? Well, obviously, they just didn’t get it. They couldn’t understand why someone in such back pain who was busy at work and preparing to leave town would completely stress herself out any more on completing a self-established deadline. In short, they felt I needed to give myself a break. So I gave myself an extension. In reality, I hadn’t started this endeavor on exactly June 1st, it was more like June 5th so an extension was entirely legal. I’d finish up over the Labor Day weekend. 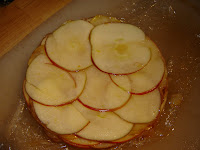 Now why would I expect the recipe before the last to be any easier than any other? And what is a pavé, anyway? A pavé, dear reader, is apparently a triangular dessert. A triangular dessert made from round apples and, instead of quinces which are out of season, oblong pears. The pear substitute idea came rather easily as I imagined quince would be similar to pear and luckily they were in season at the market.

I carefully cut “paper thin” slices of just-in-season gravenstein apples and pears and brushed honey-lemon sauce on each layer, then covered it and weighted it down with a brick. I’m evidently not evolved enough of a cook to have a 2 lb cooking weight in my cupboard. I jammed the sticky honey “pavé” and the canister of pecan-maple ice cream into the cooler and headed to Sonoma for the Labor Day Weekend.

This recipe should have been called Baklava! The thin but crunchy slices and the honey sauce make a delicious and healthy version of that middle eastern classic. Then of course, good old 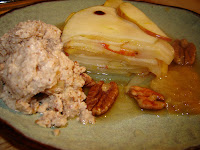 Roxanne wants the dessert to rest in a pool of sultana juice. This is not the first time she has thrown that curve fruit at me. I came to learn that sultanas are small and special dried grapes from the other side of the world. I could have used raisins, but found some champagne grapes at the market which when pureed and strained turned out as a sumptuous substitute!

The pecan maple ice cream – well, it had all the flavors, but the consistency was gritty and mealy. Just didn’t work. I would say next time I would strain it all before freezing, because the maple and pecan flavors were delicious.

When I lifted the brick from the pavé I had my doubts if the dessert would stay together and had even less confidence that when I took a knife to it that I would be successful in cutting triangles from round fruits, but the Klein-Trotter gods must have been looking down benevolently upon me, because the knife sliced right through and voila! The next to the last recipe was born, and this recipe was light, fruity, tart, attractive and DELICIOUS!
Posted by my heroes at 11:31 PM