Shiitake Soup, Raviolis and Time to Back Out

It’s nice to intersperse dismal-outcome recipes with successful ones. But aggravating as hell to have the end of my passionate journey interrupted with my hip going out of place and causing me all this back pain. I ignored my stiff back all summer (kitchen-store-office-kitchen-blog, and so on, was the constant routine) and finally the body parts got together, conspired against me and went on strike. My chiropractor noticed one leg longer than the other and pointed out that I had no use of a major set of muscles that control my leg. Hip is out, he says. I guess one adjustment isn’t going to do the trick because this morning, I am still hobbling and hurting. 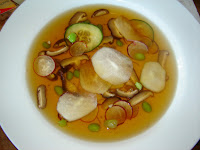 Even though Shiitake Soup with Lime Radish and Winged Beans and the Bleeding Heart Radish Ravioli with Yellow Tomato Sauce were both modified, because who on earth has lime or bleeding heart radish? And winged beans must be from some other planet, my substitutes turned out quite nicely, and both made a delicious lunch yesterday. Lime Radish was substituted with chayote, winged beans with soy beans (thanks to Lesley Stiles of the Contra Costa Farmers Markets who told me she knew of winged beans and that they were similar to soy beans), and I used watermelon radish for the ravioli “stuffed” with herbed cashew cheese 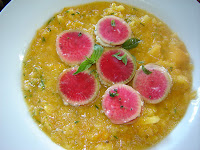 . So healthy, so fresh, so colorful, so delicious.

My Daniel keeps threatening to write up a posting, and I hope I will be able to include something from him before I finish. It’s been hard on him. He’s busy with his business too, and even so has exclusively cared for the dogs all summer, helped out more than he’s used to with the kitchen, shared his office space with me (grudgingly), dropped everything and made store runs for me, but mostly put up with not having me accessible. I think it’s the last point that he has resented the most. So, anyway, it would be interesting to see what he would write, so I hope he does.

It is with great satisfaction that I crossed off the last of the savory dishes in the table of contents. It’s hard to believe that I only have TWO recipes left! Today I plan to tackle Recipe 51: Apple-Quince Pave with Pecan-Maple Ice Cream.
Of course quince is not in season, so it will just be an Apple Pave (whatever Pave is).
OK, left lower back muscle is calling me. Time to move to another position. Maybe I’ll hobble to the kitchen and review the recipe and think about whether I can go to work today.
Posted by my heroes at 2:36 PM No comments: