My sister Susie has been galavanting the country, completely ignoring me. OK, it’s true, she’s one of the few dedicated blog readers, but still. How dare she go on two vacations and ha

ve a good time without me? But yesterday I got a few precious hours with her alone, so made the Cherries Sabayon as an afternoon dessert. Fitting, because my sister Susie is: a bowl full of cherries! And, also affectionately described by my husband as a Mary Hartman act-alike. But even though she has some really genuine Mary Hartman mannerisms, Susie has that cherry-bowl thing going on.

She teaches me how precious life is. She’s someone who drinks in every moment of life’s experiences like a rare elixir. Biologist, teacher, adventurer, mother, violinist? and now grandmammy of twins. There is no one I’d rather travel with. She makes me do things. Dangerous and wild things like hiking in a tropical forest with only my flipflops and no bug spray (can you say 37 bug bites in the face?) or like spending the night on an open 300’ high platform, exposed to the elements in a strange and tropical country. I won’t go into the details behind the weird slurping sounds I heard as I laid awake pretending to be asleep. 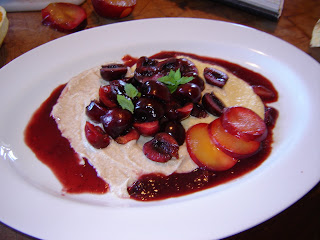 evice. She is bold and brave and wonderful. She is German too, and hard-headed, that one, but still, a bowl full of cherries.

And so Michigan Sour Cherries with Vanilla Cream and Orange Sabayon. Minus the Michigan Sour part of it. Cherries are coming to the end of their season so I was anxious to use this recipe while they are still so deliciously dropping. What are Michigan Sour cherries, anyway? I probably would have had to order them online or something. I wielded my hatchet again so that I could make the cream and sabayon, whose bases are pureed young coconut (I know what that is now).

I hate to possibly add a speed bump to all you potential raw foodies out there, but in order to really get into the raw food thing, you’ll eventually break down like I have done and purchase a better blender than your house blender. I just spent $400 on a Vita-Mix blender and I expect it will be well worth it. The problem is, soups and sauces, like this sabayon, for example, just aren’t as smooth and velvety as you want them to be. Use the Cuisinart you say? Nope. I thought the same thing--the Cuisinart does a lot of things well and does puree, but it does not get it that smooth, velvety consistency. So I’m down $400 and am anxiously waiting my new purchase to arrive any day now. I ordered a red one. Like cherries.
Posted by my heroes at 4:56 PM 2 comments: