Truthfully I haven’t felt that great lately. What could it be? It’s true I’m meno-pausing. Or could it be the back and forth between raw and cooked…the real world that I still have to live (and eat) in and the at-home world where I can control my meals? It is also likely that eating raw is detoxing me, and every time I go back to cooked foods, I am more sensitive to the toxins in those foods. With a hot flash or two for emphasis.

Life is like that. Think of the toxic people we have to be around. I’ve arranged my life intentionally to exclude the types who don’t harmonize with me, but I still have to run into them from time to time on the outside. Frankly, because I’ve held the distance from them and protected my space, it’s given me a greater capacity to not feel so threatened by them, and to even have compassion (from a safe distance!). Hopefully this not-feeling-on-top-of-the-world thing that has come on in the last days is just a movement forward to the next whatever good thing I’ll be experiencing, like delicious heirloom tomatoes!

Today’s dish is Heirloom Tomato Terrine. What better summertime dish than this one when tomatoes are coming into their peak. I’m not a “cut out the seeds and peel” kind of gal. I think tomatoes are so delicious nothing should be cut off, except the navel, but for this recipe, since it would be a stacked dish, in a terrine (vs. a tureen, Justine), I followed the directions and peeled the tomatoes and removed those delicious seeds. I slurped up a few as I went and saved the peelings, etc. to juice and pour on the 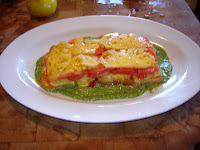 dog’s head. Yes, the faint aroma of skunk lingers yet.

Here’s the dish on a bed of spinach pesto (w/cashews, garlic, salt and olive oil). She wanted me to salt and pepper each layer of the tomatoes but I love the naked flavor of tomatoes so much, I couldn’t bring myself to do that. Of course when I went to flip it over onto the dish, there were a few runaway tomatoes sliding out, trying to ruin the photo. So just like how I’ve been feeling, I’ll pull myself back in…slide the tomato back into the space where it belongs, let it all marry together, and then cut a slice of life and enjoy how delicious it tastes, even if I’m not feeling on top of the world.
Posted by my heroes at 8:56 PM 3 comments: