Vibrant Flavors and Let’s Not Forget the Wine!

“I can’t even stand how good this tastes!” I exclaimed to my husband who was staring off into space as my words bounced off his hard Polish head and floated off into the atmosphere unheard. He was busily crunching on a delicate, thinly sliced and perfectly marinated radish. He blandly vollied back, “yeah, this is great.” I think last night’s party where the Bat Boys band he played with 20 years ago reunited for Henry’s 50th left him a little listless. 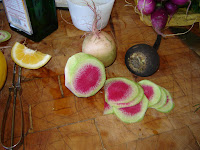 Who could know that you could like a carrot so much? I mean, just a plain old carrot. Ah, but not just a plain old carrot, but a plain-old-carrot marinated. How could I really like a radish so much? I mean, a radish, with that kind of harsh-hot flavor? Ah, but a radish marinated…it changes. Then a beet. Well, we’ve all probably enjoyed beet salad, so that’s no surprise. But raw artichoke heart? Bland by itself, but marinated….a caterpillar to a butterfly. And so is born Carpaccio of Radish, Carrot, Artichoke and Golden Beet. Not bleeding heart radish as is specified, but the only other-worldly radish I could find: watermelon. Ain’t it pretty? 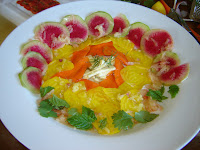 Husband did come to life in one way though. He did not know that raw cuisine called for fine wines and really perked up when I educated him that yes, raw cuisine does promote pairing with wine. I know I've never mentioned this before, but in fact, each recipe in the Klein/Trotter book contains a footnote with a very thorough and careful recommendation on which wine to pair with the recipe and why. Daniel thought it essential that I bring this up on the blog, and he’s right. YES! Raw foodies can and do drink wine. Wine is, afterall RAW! Wines, sherries and ports can also be 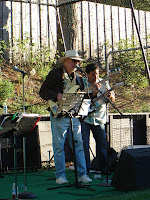 found as ingredients to give many raw food dishes dimension.

This dish’s wine recommendation was a sparkling white…Blanc de Blancs from Pierre Peters or Larmandier-Bernier, to be exact. So my husband is pretty astute, and I thank him for pointing this out to me. And even though I don’t always feel heard by him, which I find infuriating, I must still be in love because my heart still melts when I see him onstage singing Little Sister.
Posted by my heroes at 11:57 AM 2 comments: