Off-Key Duet and a Quartet of Soups

Somehow the dishes are getting done. In fact I discover him in front of the sink often these days. It’s kind of hard for me to believe but I think my husband’s learning where some of the less frequently-used kitchen items are stored. No, he hasn’t learned to wipe the counters clean, but he does sweep the floor if I ask. And he shares his computer with me for my blog writing and photos with a minimum of grumbling.

Why isn’t this enough for me? Why do I also want him to be in good cheer about the whole thing and to offer a supportive attitude? It’s not enough that he supports me with his actions, I want his attitude to align with mine too. There has been some friction in the household the last few days. When things are good, I reflect back on the sour times and think I’ve been too intense and should ease up on him. When things aren’t so harmonious I realize it’s definitely him, not me. No, I’m not PMSing as he likes to suggest in these situations. In fact, I think HE is PMSing, and if I WERE PMSing, he would be taking his life into his hands by even suggesting this.

Like tonight. Soup Quartet. The soups have been cupped, garnished, photo taken (by me, I’d like to emphasize). He walks into kitchen. I say, “hey the soups are ready, let’s taste them

.” What’s his response?
I’ll try them tomorrow.
You'll try them TOMORROW?!
Not: Hey, honey just LOOK at those soups. Wow. I can’t wait to taste them.
So that’s what I say to him, basically. I’m sure there’s some term for this technique in psychology, like leading the stupid, pea-brained horse to water or something.
Then he backs up. “Of course I want to taste them tonight.” The horse drinks water.

One thing I work at here at the homestead is composting. I save all our kitchen scraps for the worm bin and for the compost pile. This decreases our garbage volume, adds valuable microbes back to the soil, which saves on watering the plants, enriches the soil better than any store-bought fertilizer could ever do, saves $$ on buying water-table polluting fertilizers, doesn’t contribute to the ever-piling high sea of garbage at the dumps that we’re running out of space on…gee, what else? Suffice to say I’m going to the trouble to do a good thing (remembering, of course, that no good deed goes unpunished). 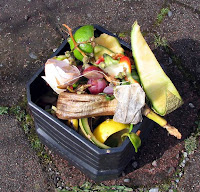 Do I get a pat on the back? No, he has the nerve to make snide comments about the fruit flies that gently buzz around my compost canister. It’s not like a swarm, and I clean it out every other day. What’s the big deal?

Today I harvested compost from my worm bin and walked through the house with a bag full to spread on the lawn.
Eew, what’s that? He whined. I imagine his face all screwed up, because that’s what I see when he takes that tone.
It’s worm castings, are you hungry?
I mean, Daniel is a guy-guy. Why would something like worm castings, fruit flies or decomposing vegetables gross him out?
I think he does this just to piss me off. It does.
And so the soups provided a perfect illustration of just how different we are.
As I said, tonight I made A Quartet of Soups: Asparagus, Carrot, Corn and Celery Root (see comment for recipe). But first, a word about the soups. All very simple to make, except the frickin garnish on the Celery Root Soup took a couple of days. They wanted to marinate the eggplant quarters that are dropped in the soup, as well as the slivered celery root on top. I don’t know whether I like celery root or not, but I found the soup complex and tastey. The Carrot Soup with young thai coconut, well, I always like carrot soup or juice, so that’s a n 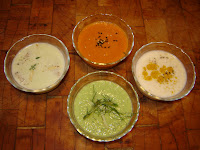 o brainer. I also like Corn Soup, but somehow this one did not work for me. Too simple, I think. It simply consisted of pureed corn and water seasoned with salt to taste, then strained and a few kernels thrown back in. I suggest making it with nut milk and not straining it, that would help. just didn’t do it for me. I found the raw flavor of blended asparagus a little wild and slightly bitter. It had celery, onion and a host of other ingredients…something just seemed off, maybe my taste buds. Like my taste for husbands.

Now I don’t know if you are getting the full irony here, but we are EXACT opposites! Celery Root my favorite – his least favorite. Asparagus my least favorite—his favorite. God help us.

I guess it is interesting being married to a guy who astonishes me with such confounding differences.

What I fell in love with, and still am in love with, are the wild seemingly grab-bag thoughts that blurt out of his mouth, the man who can write music and sing it to me right on the spot, the man who cares for our dogs like they are our children, and the man who wanted to build a life with me. He has made a home for me and even when I find him infuriating or irritating, I am not alone. He is there loving me, but in his way, not always mine, but loving me nonetheless. Like by doing the dishes.
Posted by my heroes at 10:01 PM 1 comment: