Whenever we’re invited over, we always try to bring more than we take.
Last night our friend Nick was celebrating moving into his new place.
Like the Clampits that we are, we of course brought our dogs. He’s on ten acres of open space and the dogs were in pure heaven running around like hyenas.

We had a lovely evening and toward the end of the night an overwhelming odor floated onto the patio as Boomer (our dog) approached. We knew within a split second he had been skunked. Poor boy got hit in the face and his eyes were burning, as he madly rolled himself on Nick’s lawn. Boomer often wears a t-shirt, so we pulled the soaked t-shirt off of him, he rolled some more. We squirted his eyes with water and wiped them off with paper towels and he rolled some more. By this time, we both were reeking.

As nice of a guy as Nick is, I couldn’t help notice how he tried to close his front door on me as I tried to walk in. Imagine that. Soon his whole house was reeking and all his guests were groaning. By then my olfactories were desensitized so I didn’t see what the big deal was. We called the vet who gave us a concoction to remove the odor:
-1 qt hydrogen peroxide 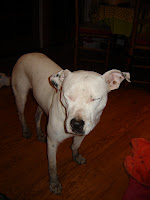 We ungracefully bowed out with Nick enthusiastically waving goodbye through a closed window (I think he was holding his nose).

We got home and bathed Boomer and it was much better except for the fact the damn skunk got him in the face and we couldn’t put the mixture too close to his eyes. So you only smell it if you kiss him, or when he kisses you! He of course slept with us last night, after all he’d been through I couldn’t reject him from his comfort zone.

But we had to chuckle this morning, realizing that Boomer had probably wiped most of the skunk smell onto Nick’s lawn, right in front of his front door. I wonder how long that smell will linger? And imagining the skunk-soaked t-shirt laying in his yard as a special “gift” made us laugh even harder. Happy House Warming, Nick!
Yes, we’re givers.

Next up: Open Faced Tomato Tart & Ceasar Salad with Rawmesan & Croutons!
Posted by my heroes at 10:36 AM 4 comments: