Recipe #48: This is NOT for the Home Cook

Peel the pineapple. Cut a 4” long section of the pineapple. Using an electric slicer or a large, sharp knife, cut the section lengthwise to yield paper-thin slices....”

Yes, I’m going to cut “paper thin” slices out of a rugged, bumpy, juicy pineapple. Right. The best I could do was slice uneven hunks the thickness of corrugated cardboard, which by the way was the color of the coconut gelato: cardboard. No my friend, these recipes aren’t really for the home cook. They are a showcase of raw food at its fanciest with no regard 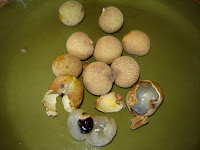 for the untrained home cook. I was supposed to roll these “paper thin” pineapple pieces into rolls to make Tropical Fruit Spring Rolls with Coconut Sorbet.

Today was typical of the others, a scanning of the recipe, a mad dash to two stores to collect ingredients, back in the office until I’m so hungry I can’t stand it so I head down, make some lunch and Begin.

But this morning had a little exciting twist. This wonderfully impossible recipe called for the elusive longans that I’ve never found, but I’ve since learned that longans are very similar to lychees, so that’s what I’ve been using as a substitute. At the Asian market where I’ve been procuring my $1.29 young thai coconuts, I loaded up on lychees but then at the check out, what do I behold, but LONGANS! Wow, here I had given up and there they were. I tossed t 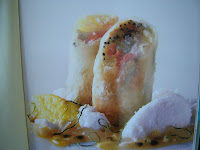 he lychees back in a pile and purchased these little suckers which were to be used as the filling for the unable-to-ever-roll-in-it’s-lifetime “spring rolls.”

Here’s what the Spring Rolls were supposed to look like (photo taken from the book).

For the coconut gelato, it called for honey granules. Yeah right, like I have honey granules just sitting around in my spice cabinet. Knowing better than to use liquid honey, because that might cause it to be too runny, I thought I would outsmart Roxanee and Charlie by using the rawest form of natural sugar, sucanat (http://en.wikipedia.org/wiki/Sucanat). Well, they had the last laugh (can’t you just see them snickering?) because sucanet retains its molasses so it turned my snow-white coconut gelato a dirty brown color. Just the right color to frighten the appetite. 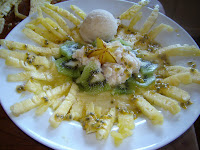 But actually, the gelato tasted wonderful, it really did!

Here’s my what mine turned out like (see photo).

This recipe could not have been any less sustainable, locale-wise. From the coconuts and macadamias from Hawaii to the passion fruit and longans from some far-off tropical paradise, this is a million dollar dessert in airline flights and handlers across the world. I wish I could say the flavor was worth it, but nah, I was unimpressed and Daniel didn’t even bother trying it.

Am glad I left this recipe toward the end. If I had attempted this one at the beginning I might have been too discouraged to continue.
Posted by my heroes at 3:44 PM 1 comment: