Bought my first cleaver today. And, finally, finally found out what the hell sh 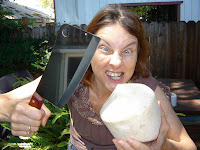 e means by “young Thai coconut” in so many of her recipes. In the past, I just used dried coconut but last night I attended Elaina Love’s class on a Detox Diet at Café Soulstice, and it was wonderful. She not only had a young coconut but used it in the class and demonstrated how to open it.

So when I found the “young Thai coconut” at a local Asian grocery AND a cleaver at my other favorite Asian market to open it with, I decided it was a Good Day. I just adore being in the kitchen, it’s my new favorite thing in life. I could do this every day, but only as long as I didn’t have anyone telling me what to do, or what I am doing wrong (everything). Anyway, dessert was to be Fig Napoleon with Honey Pastry Cream.

First I started early this morning with the “Baklava Tuiles.” Golden flaxseeds, maple sugar, fuji apple, cinnamon and vanilla. I was supposed to spread that onto the dehydrator tray, but really I poured it onto the tray. Then I realized the problem: I had used maple syrup instead of maple sugar. It was too runny. Damn! Good thing I was getting started early, now 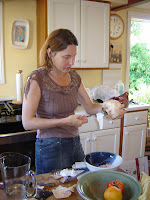 I would have extra time to dehydrate it several more hours to get the tuile to the crisp texture it needed.

Deb dropped by so I decided it would be safest to try the new cleaver with a guardian standing by. I wielded the big axe and actually did a fair approximation of what I saw Elaina do last night. Deb was impressed. I was shocked that I still had my fingers.

Now that I had opened the coconut, I could make the “custard” for Star Thistle Gelato (young thai coconut meat, coconut juice, honey, cashew milk, honey, coconut oil and vanilla). From that base I added agar agar and some cashews to supposedly thicken it up. Into the blender as directed. Whirl, whirl. Still like water. Whirl, Whirl. Not thickening.

Checked the tuile and flipped it. Hours later it was still not crisp. This is when I started multi-tasking. This is what I do when I'm nervous. I put in the remaining star thistle custard into the ice cream maker. Why not make it gelato as intended? Intermittently running the blender trying to thicken the cream. Also cutting, chopping and mixing ingredients for the main entrée. Washing dishes. Re-reading the recipes. The kitchen is getting more crowded with produce scraps, dirty cutting boards and measuring cups. Crash! One of the pitchers I have drying turns over and breaks in the sink. I rummage through the dirty dishes and retrieve the broken pieces. Goodbye, pitcher. I puree up the fig sauce for dessert. It is 8 p.m. Husband sizes up situation and announces he is going out to buy us dinner. Check tuile, still pliable. I turn the dehydrator up. Fuck the enzymes and nutrients, I want it crisp! Gelato done, voila! I put in freezer. Now to focus on entrée.

After my tirade about not eating raw mushrooms in the previous post, I would be damned if I would eat the Portobello Mushroom Pave recipe raw. But I still wanted to do the recipe, afterall I have vowed to do every recipe in the book. So I decided to broil the mushrooms. Let me just 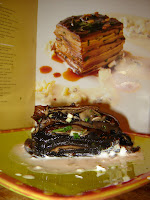 say I’m glad Daniel went out to buy dinner. And also that cooked mushrooms aren’t too friendly about being cut “paper thin.” I did get good at it though. When Daniel came home and complained the salmon skin had been left on, I said “No Problem!” and whipped out my knife and slicked off the skin pretty well, I’ll admit. But I have to say, folks, this is the first recipe I’ve done in this book that I really disliked, and I like portobellos. Even the sauce, (tahini, shallot, garlic, oil, rice vinegar and water) was yucky! Nope, this one didn’t turn out. Pictured here is my dish with the photo from the book behind it. See how nice hers looks? Mine looks like sliced dead frog. Ribit. Maybe if mine were raw they would have had more flavor and been more attractive on the plate, but like I said: I won’t eat mushrooms raw anymore.

So the entrée was pretty much a failure, but I still had hopes for the Fig Napoleon. I checked the 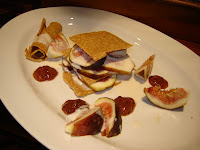 dehydrator, still the tuile is not crisp. It’s 9:30 p.m. Screw it. You can’t tell in the photo they’re not crispy, I reasoned, and they still taste good, so that’s the way it will be. It was pretty delicious, even though the sauce never thickened and the tuile was soft. Daniel doesn’t like figs, or so he thought, because he ate almost all of his dessert even though he wasn’t hungry (as if hunger ever had anything to do with enjoying a dessert…men!) After the photo, I put the tuile back into the dehydrator. Just to punish them I am going to keep them in there all night. We’ll see if they defy crispness then.
Posted by my heroes at 11:04 PM 3 comments:

Shrooms aren’t Vegetables, so Don’t Eat ‘em Raw (right, even those little white ones they serve in your salad)

After my weekend hiatus am back eating raw again and feeling as energetic as ever. Have found that my stove top makes a good drain board, so it’s useful for something.


Yesterday I made Mushroom Ragout. Now we can have a serious talk about when raw foodies take it too far. I put my trust in Paul Stamet, see http://www.fungi.com/front/stamets/index.html. I consider him the foremost authority on mushrooms in this country, if not the world. Well, at least he’s the one I’ve heard of anyway. He has discovered that mushrooms can clean up toxic waste in our environment far more effectively than any conventional methods ever used, and in his studies he advocates using mushrooms medicinally to stimulate your immune system and treat various diseases. But one thing Mr. Stamet is clear on, is that raw mushrooms do not have nutritional or medicinal value for us. Mushrooms must be cooked for our bodies to commune with nature, so to speak. In fact, mushrooms can have a slight toxicity when eaten raw. In short, it’s not good for you.

My question was: how cooked do they have to be? So I called the helpful staff there at Fungi Perfecti and was told mushrooms need to be cooked to at least 160 degrees. Portobellos need an even higher temperature: 400 degrees. Apparently mushrooms (not a vegetable, they are fungi, so they are their own animal) have very large proteins (and other compounds too) which our bodies can’t break down. Cook 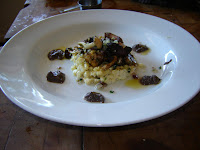 ing reduces their size, making us able to assimilate the mushroom’s great qualities, such as anti-inflammatory, anti-viral, anti-bacterial, reduces cholesterol, and immune enhancer just to name a few (see the chart at: http://www.fungi.com/mycomeds/info.html).

The danger in eating them raw? Well unless your diet is really high in fiber, they’ve been know to cause colon impactions. Our bodies just don’t know what to do with them raw. Thank you, Julia from Fungi Perfecti, for sharing your valuable time and knowledge with me. 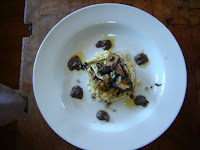 Which brings me to the Polenta with Wild Mushroom Ragout recipe. Turned out lovely and tastey, and my colon did not have a fit…have a look at the list of mushrooms it called for:

The recipe called to dehydrate them, which I did, but if I ever make this recipe again, I will pull out the old frying pan and convert my stove top from it’s dish draining duties and give it back it’s old job.

PS: go to this link to see something that will blow your mind!
http://www.fungi.com/info/articles/luminescent.html