Bottom of the Barrel: XIV

I keep counting and re-counting how many recipes I have left. Then I go to the calendar (again) and count how many days left in August. Today it’s ten left, with 14 days to go. Totally do-able if I double up on a few days, because I know I won’t be in the kitchen for at least five of those days. (Going to the living food fest up in Ft. Bragg next weekend!)

Here’s what I have left: just one in the appetizer section: Pear Napoleon with Porcini Mushrooms and Artichokes (I’ve been saving that one for pears to come in season, and they’re just beginning!); two soups: Shitake Mushroom Soup with Lime Radish and Winged Beans. Wait, let’s just stop there. Can you guess why I haven’t made this one yet? What is lime radish? What are winged beans?

Can anyone help me out here? Suggestions for any likely substitutes??

The last soup is Butternut Squash and Ginger with Spaghetti Squash. In the salad department I only have one left: Carpaccio of Artichokes, Bleed 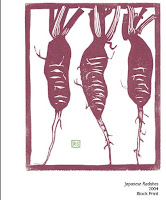 ing Heart Radish, Carrots and Golden Beets. What’s a frickin’ bleeding heart radish? Last in the entrée department is one with the same problem: Bleeding Heart Radish Ravioli with Yellow Tomato Sauce. It’s going to be bleeding heart too bad, but I doubt that I will find a bleeding heart radish to satisfy either of these recipes, but I’ll start to make the round of calls….again. Maybe I’ll get lucky like I did with the salsify and find that it will suddenly come in season.
Radish print courtesy of Rigel's beautiful art you can see at: http://www.drenculture.com/prints/vegetables/index.htm

I get to end with quite a few from the dessert department: Fig Tart which I’m doing tomorrow, then Tropical Fruit Spring Rolls with Coconut Sorbet – since the “roll” is made from paper-thin cut pineapple, this one is a calamity just waiting to get it’s picture taken. I won’t be able to put it off for much longer though, will I? Trio of Gelatos – this should be no problem, except she calls for persimmon and they won’t be in season until Fall…what to do, what to do…
Apple-Quince Pave, well, that one looks hard and also quince isn’t in season. And lastly, Chocolate Chip Cookies – they call for sprouted wheat flour with no indication of how to make it, but I can guess and also sprouted meal. OK meal of what? Again, no clue of what it is or how to make, so I’ll be improvising and testing them out on the choir girls next Wednesday.
God help ‘em.
Posted by my heroes at 3:34 PM No comments:

Are you Allergic to Wheat?

I hear more and more of people discovering they are allergic to wheat. I find this ironic since wheat is like the first grain humans discovered to cultivate that kept them from starving and is probably why our species was able to thrive. How could we now, so far down the line of evolution, be allergic to something so basic? It isn’t genetically modified from what I’ve learned. Could it be because it’s been hybridized? Maybe the way it’s being processed. Or maybe we’re just getting too much of it.

Practicing this diet all summer (even though worlds have collided and I have not been pure), I

have probably eaten more cleanly than ever before. I haven’t had a drop of dairy ice cream in months and months and very little bread or cooked wheat. Yesterday I picked up some wheat hot dog buns for tofu dogs. We were going to the county fair so I thought we’d eat some junk food at home to avoid the truly poisonous junk food at the fair.

I noticed after dinner my nose was markedly stuffy. Could this be a wheat allergy?? I suspect so. I bet many of us have a mild allergy to wheat and we’ve just learned to live with it. We think our stuffy nose or irritated throat or tendency to get colds is normal. Having been off wheat, as well as other cooked foods, I have noticed my usual slightly runny nose disappeared. It was all too telling when I reintroduced wheat yesterday and immediately had a runny nose all evening.

With that said Roxanne does use wheat in some of her recipes, for example the chocolate chip cookies. In fact rejuvelac, hailed to be so healthy by the raw foodists because it’s loaded with good-for-your-gut microbes, is made from sprouted wheat. But maybe it’s in the cooking?? Because I’ve not had an allergic reaction to the rejuvelac or the cheeses I’ve made from it. Or the tart shell I made the other day from the sprouted wheat flour.

So this is a curious thing. It is surprising how many food items (mostly processed) you’ll find that wheat has been snuck into, to cheaply thicken it or like in so many vegetarian items, to give it that more chewy “meaty” consistency. It’s like the pervasive GMO corn syrup found in countless processed foods.

So I invite you to question. If you’ve been feeling slightly under the weather, or downright sick, you may want to cast a suspicious eye toward that fluffy, innocent looking loaf of bread on your counter.
Posted by my heroes at 3:31 PM 2 comments:

I think they should make the word “salsify” into a verb. For example, I found it very salsifying to finally, at long last make salsify into a recipe. Would that work?

I also found salsify delicious and nutritious (salsilitious?). High in fiber, Vitamin C, riboflavin, Vitamin B6, potassium and manganese. Using a vegetable peeler to peel strips made for nice wide paparadelli-like noodles which were marinated in wine vinegar and then mixed with truffle oil and salt. The porcinis were also marinated. The sauce was pine nut puree which brought all the flavors together. Salsify is a very mild tasting root, not bitter, not sweet and I think it does have the slightest hint of the flavor of an oyster. Or else that was just subliminal on my part knowing it is also called oyster plant. The recipe was called Salsify with Black Truffles and Porcini Mushrooms. Mine was simply Salsify with Porcinis. Until I move to Europe I don’t think you’ll see truffles being a stocked item in my kitchen, ever. 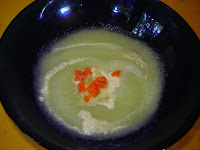 Next up was the English Cucumber Soup with Tiny Carrots and Amaranth Leaves and Pine Nut Mayonnaise. She wanted me to somehow find white and purple baby carrots (of course I ran across baby purple carrots this morning, sigh). And what the hell are Amaranth leaves, I mean, PLEASE?! I didn’t even bother. This recipe was basically just pureed cucumber, but the mayo and diced (not baby) carrots on top gave it dimension.

The Marinated Exotic Mushrooms with Kohlrabi and 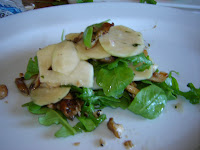 Arugula was easy to make and I had been looking forward to using kohlrabi in a recipe. I ran into it for the first time at the farmers market years ago and feebly tried it a time or two. Since then I’ve read about it being used as a substitute for mashed potatoes because of it’s savory and mildly horseradish flavor. This was a tasty dish I might do again.

What a fun adventure broadening my root horizons between salsify and kohlrabi, and even lotus root.
How very salsifying.
Posted by my heroes at 2:43 PM No comments: