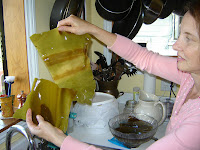 Did I say this project has taught me to be courageous about substitutes? Did I say that?
No Japanese market in the vicinity has heard of Tengusa, so I tried Kombu. Kombu allowed me to skip the tedious steps of making a gel sheet out of the tengusa, dehydrate and then roll it up.
Like I could have ever done that anyway!
Hey, not finding tengusa was a favor. As was not finding sea beans. Actually, I think I’ve eaten seabeans before and I sure would have liked to try them, but if I expect to do a recipe almost every damn day, I can only search so far and wide. So it was julienned French beans mixed with 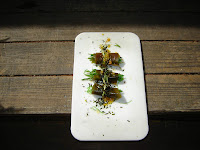 So do I announce my failures to the world? That eating kombu was like eating a rolled up piece of kelp you step over at the beach? I ate one and spared my husband. Sea vegetables make good compost.