This would have been a fairly straight-forward recipe except that for some unintelligible, are-you-just-trying-to-torture-me reason, the recipe calls to dehydrate 1 lb. of the peeled and chopped butternut squash. Then you puree that with the fresh peeled, chopped butternut, ginger and other ingredients to make the soup. So this extra step, which surely would make or break the recipe, took a day.

I loyally followed directions. I was rewarded with about two teaspoons of dehydrated squash to add to the soup. Oh now this is really going to make a difference, isn’t it? You hold up a recipe for 18 hours to dehydrate 1 lb of squash and you end up with two teaspoons. If you ever make this recipe, skip that stupid, unnecessary step. It is fascinating to note what this means: that the bulk of squash is water!

The other dysfunctional thing about this recipe is how they instruct to make the “tuilles.” Thi 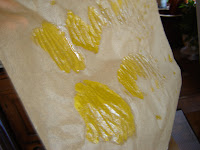 s is pureed squash with water and olive oil, which they then instruct you to pass through a sieve and then spread rounds out on a dehydrator sheet. I’m sorry, but if you strain it, there's no "spreading" about it, you are pouring runny liquid onto a dehydrator sheet! But I did it anyway. It looked like runny watercolor paint: Tuille de Monet le PeePee. Anticipating complete failure, I also made tuilles out of the actual puree, unstrained.

Thank goodness, because the liquid tuilles were nothing but stain marks on the parchment: Tuille de Monet le peepee Fini. The pureed tuilles were flakey, paper-thin cakes. 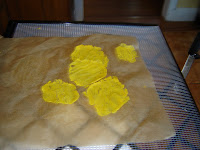 The shredded spaghetti squash in the soup was delicious, and inspired me to try and come up with a raw version of Sizzling Rice Soup. The crunchy shredded spaghetti squash really reminded of the sizzled rice they serve in the popular Asian soup.
Overall the soup had a nice, full flavor and the tuilles added some “meat” to the dish. What keeps on surprising me about raw food is how filling it can be. A bowl of this soup with a small salad for lunch totally satiated me. And without the unnecessar 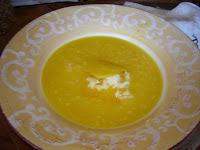 y step of dehydrating the squash, this recipe is fairly easy to make.
Posted by my heroes at 6:51 PM No comments: