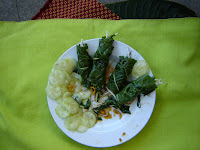 I did these recipes so long ago I barely remember it. It was day before yesterday.


That was the day when I happily invited Sue, my professional photographer sister (I have a lot of sisters) over. I said, why don't you come by and photograph a recipe and have dinner?

It was no problem because I had planned to whirl up a lentil loaf for the main course and attempt the daikon lo mein as a side dish.

Then I tasted the lentil loaf and remembered...I don't like the flavor of ground sprouted lentils...yuck! Then I was in a panic. What would we have for dinner? I slapped open 'The Book' and selected the next appetizer up: Mung Bean Salad Wrapped in Swiss Chard with Marinated Vegetables and Thai Vinaigrette. Alane had delivered fresh picked chard from her garden the day before, so all I had to come up with was:

Being incredibly foresightful (is that a word?) I opened another recipe and hurriedly wrote down some more wierdo ingredients I would need for future. Thinking ahead. Tengusa seaweed, sea beans, and agar agar, I think it was.

I hopped on my bike straight for Takahashi Market. Yes, on the yuzu and agar. no fresh water chestnuts so in flew the canned version. Try the bigger Japanese market. OK. No. To Draeger's: No. Since the mushrooms were basically for garnish, I got some frisee salad, that would look good. But at check-out I learned it was like $7 for a bunch. Frisee rejected. By now I was spinning. Sue would be there in less than an hour and I had to throw it all together. The kitchen was a mess. I got stressed (equals yelling at poor husband). 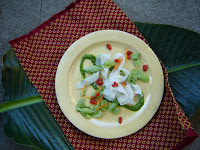 Sue arrived and actually liked the lentil loaf so much she took some home. The funny thing about daikon is the taste seems to change if you julienne it or shave it, as this recipe calls for. I don't like the strong hot-radish flavor, but shaved, it seems to soften and the flavor improves. Both dishes turned out ok, but not very flavorful. But it was certainly healthy and we were satiated. Then I realized I had forgotten to include the pureed waterchestnut in the chard rolls! doh!

And so is life. A rush of stress spreads into a wave of ease. A wave of good times squeezes into a hard time for awhile. Sometimes things are good, but they don't taste as good as you want. Sometimes you don't feel understood, then you feel you love everything on this world so much you can't stand it. The yin and yang of life.