Mystery Ingredient Soup and a Salad only the Cook will Eat 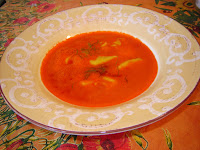 you couldn’t get the recipe, written by two high-end gourmets, to taste very good.

Or are my friends just complainers? I mean I expect it from my closet food-critic husband, but my girlfriends? Just because the Red Bell Pepper Soup with Mango Dollops had strands of “white things” in them…I mean, why make a big deal out of that? They said the “white strand things” distracted them from the taste. What sissies. I gulped mine right down. I thought it tasted pretty good. What white strand things? Finally Susan dug one out of her soup. Huh, I thought, weird. Then Justine piped up with the same complaint. What could it be? It looked like hairs from a bottle brush. Could it be the fibers from the turnip thing I added that was supposed to be juiced horseradish? No, it was too tough for that. In a word, inedible. I gav 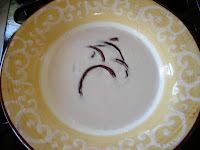 e up on trying to figure it out and poured their soups through a sieve, but neither of them accepted the refined version. Doesn't say much for their adventurous spirit, does it?

To stay in theme, today (the theme of fixing meals my guests won't eat) I made the Creamed Cauliflower Soup and the Marinated Artichokes, Turnips and Beets. The soup should be called Boringly Bland White Stuff that has no flavor. After you puree basically only cauliflower, water and some vinegar you’re supposed to put it through a sieve, but if you did that, there would only be one bowl of soup. No matter, no one would eat it anyway. Although I ate most of mine. I’m the only one around here with any determination. 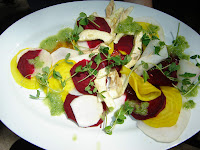 The Beet-Artichoke Marinade turned out surprisingly tasty. To me, that is. No one liked that one either, but the thinly sliced beets, turnips and artichokes flavored with a vinaigrette, a bed of date, jalapeno and cranberry sauces is really delicious. And loved ones who don’t like your food? At least I keep them entertained and obesity at bay.